Challenge #1: Write a play about a brave little soldier;

bonus points if it’s set in your home town.

Lights up on two people – DAVID and SARAH – sitting on a curved stone bench, but SARAH is looking away. Upstage of them, center, is a representation of the 9/11 Memoria – an eagle holding a bent and blackened girder from the World Trade Center. Behind that is a rail fence with a couple standing binoculars – the kind you step up to see into. Projected behind everything is a view of Sandy Hook Bay. The light should be blue-tinted except for a dock-light (the high metal-hooded flood lights that shine directly down. In the distance, the calls of seabirds are faintly discernable.

David is 35-ish, with a military buzzcut. He’s dressed in a polo-shirt with a NASA patch on the pocket, a hoodie open over it, and khaki pants. SARAH is a bit younger – 30 – , wearing a cardigan over a sundress. She’s visibly pregnant.

DAVID (pleading): Come on, Sar… talk to me. I have to report to the base at dawn, and I don’t want to leave with you angry.

SARAH (still turned away from him): There’s nothing to talk about.

DAVID: You could say goodbye, at least.

SARAH: I thought we were done with goodbyes.

DAVID (interrupting): I thought you liked living on the moon. You seemed happy at Luna Colony. You certainly seemed to enjoy the swimming pool.

SARAH: Okay, yes, there was something lovely about swimming in zero-gee under the transparent dome, but it’s not the same as breathing real air or swimming in a real ocean. It’s definitely not a place to be when you’re starting a family.

DAVID: It’s one mission, Sar, and then I’m telling them I only want ground assignments.

DAVID: Earth only. I promise.

SARAH (relenting, fierce, but flirty): I’m gonna hold you to that, Soldier.

SARAH: Yes, well. Soldier sounds better. (She takes a beat. When she speaks again, she gestures to the memorial) Do you think they’d be proud of us? My dad? Your uncle?

DAVID (also gazing at the memorial, reaching out to trace one of the names etched thereon): I think so. I know they’d be waiting to greet our little bundle of joy. Hard to believe it’s been thirty years since then.

SARAH (arms wrapped around her pregnant belly): It feels like yesterday, sometimes. I mean, I was only two, but I remember Daddy tossing me in the air, and kissing me before he left for work, and then the next thing I remember was Mom crying and holding me so tight.

DAVID (putting his arm around her): I remember my father being in tears. I don’t think I’d ever seen him cry before. (softer) He lost his twin that day. I don’t think I ever realized how deep that pain went.

SARAH: No. You couldn’t.

DAVD (worried): What is it? What’s wrong?

SARAH (smiling, her voice full of wonder): He kicked.

SARAH: Or she. The baby. Our baby kicked. (She pulls his hand to her belly). Here. Feel.

DAVID (concentrating and then delighted) Aw, wow! That’s – that’s awesome! (Addressing the belly) Hey there, little solider. I’m your dad, and I love you. And I promise not to be away too long.

SARAH: The baby? You felt it.

SARAH (after a few seconds thought): Do you remember how you described launching into space the first time? Like butterflies…

DAVID (with her): … fluttering in your stomach. (Continuing alone) And then a jolt. And then more butterflies.

DAVID (reassuringly): She won’t. He won’t. It’s one mission, Sar, I promise. A quick jaunt to the outer rings and back. (Affectionate, but teasing) Come on, be my brave little soldier, and I’ll be home before you know it.

DAVID: Maybe not, but you’re carrying our little soldier. So, be brave for his or her sake, because if you are, I will be, too.

SARAH (dubious): You get scared, when you’re up there?

SARAH: I didn’t think… you always seem so confident.

(SARAH shivers, and DAVID takes off his hoodie and wraps it around her shoulders. Then he stands.)

DAVID: Come on, let’s go home. I have it on good authority that butterflies are much calmer when they’re warm and cozy.

(He pulls SARAH to her feet and she loops her arm through his. )

SARAH: Take the scenic route. I want to watch the stars.

They walk off, stage left, arm in arm.

The lights fade to black.

@carmilevy: I look at this photo often, because it represents a better tomorrow on a stretch of downtown #LdnONT - Dundas Street - that even before the pandemic hit had already been reeling for decades. They rebuilt a few blocks of it over the past couple of years,… https://t.co/WRsR8W9SfO https://t.co/lvDpTDLiNA 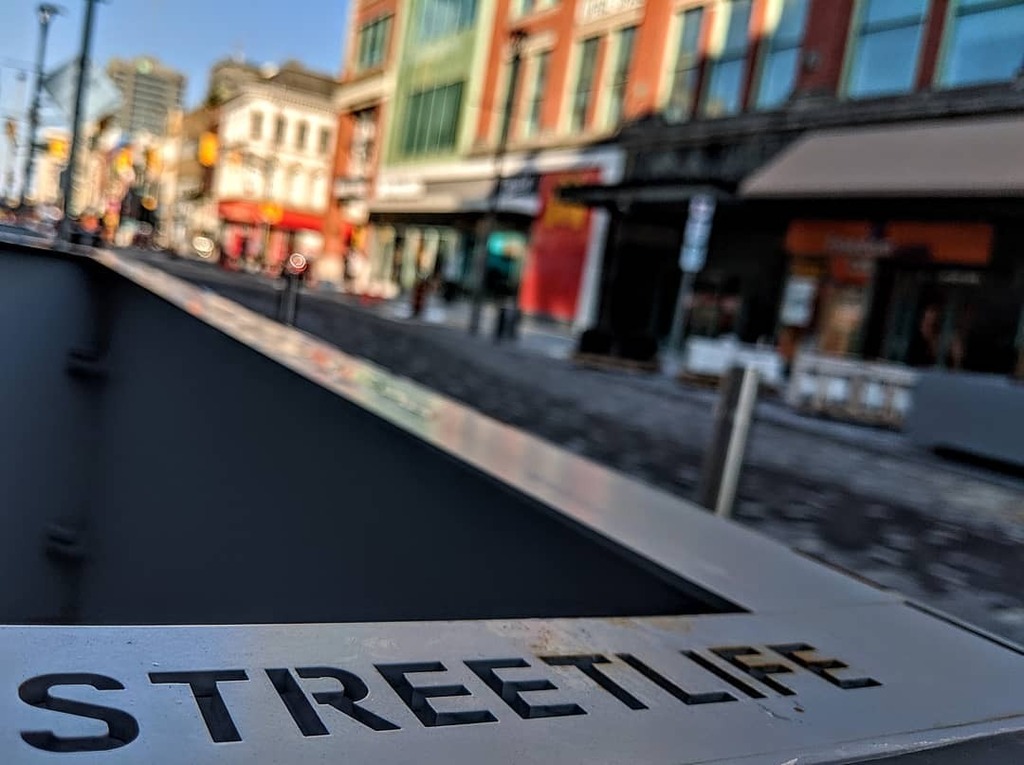